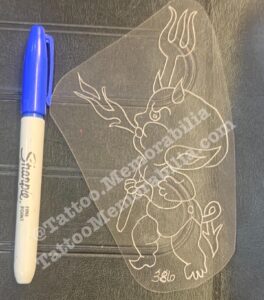 Originally opened by Lyle Tuttle in the 1960s, the shop was then owned by Cliff Raven and subsequently Robert Benedetti. This item is from the estate of the late tattoo artist, Jeff Kowalski.

Hot Stuff, the comic devil figure from Harvey Comics was a popular tattoo design since his inception.

This acetate stencil is from Jeff Kowalski during his days at the famous Sunset Strip Tattoo Studio pre 1974.

Originally opened by Lyle Tuttle in the 1960s, the shop was then owned by Cliff Raven and subsequently Robert Benedetti. This item is from the estate of the late tattoo artist, Jeff Kowalski.